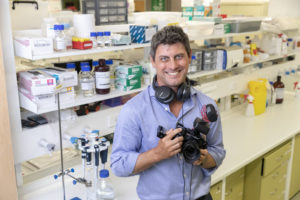 Damian was drawn to communicating science before he knew there was a profession called ‘science communication’. From initially thinking science communication was only possible through documentary film-making he embarked upon a career of learning how best to engage minds, both young and old, with the amazing world of science and technology research that we now live in.

As a trained scientist, film maker, communicator and new media creator he has used these skills to mix the worlds of art and science into engaging and dynamic communication strategies for a diverse range of audiences; from science education in remote communities to highly targeted social media campaigns for industry leaders.

He is most proud of being a founding Director of the now non-profit organisation, the Scinema International Film Festival which has delivered over 20 000 hours of science documentary to urban, rural and regional audiences across Australia for over ten years.