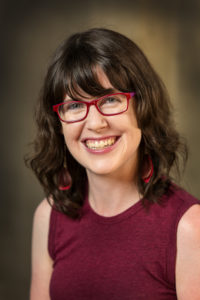 Suzannah Lyons is the online science reporter for ABC Science, where she reports on the latest research news and issues in science as part of the broadcaster’s specialist science unit. She is regularly interviewed on ABC Local Radio, and has also appeared on or produced content for Radio National programs Life Matters, Science Friction and The Science Show.

Suzannah holds a Bachelor of Arts in Mass Communication: Journalism with a minor in Radio and a Bachelor of Science in Chemistry from Murdoch University, but found she was better at telling stories than hanging out in the lab. So she ran away to Canberra to join the science circus, travelling around regional Australia presenting science shows and workshops for Questacon, while completing a Graduate Diploma in Scientific Communication at the Australian National University. She can still make a mean batch of cornflour slime.

After a stint as the editor of ScienceNetwork WA with Perth science centre Scitech, she joined the ABC in 2008. Suzannah has worked for ABC Science Online, Catalyst, ABC Health & Wellbeing, ABC Open, ABC Emergency and ABC International in Sydney, Melbourne and Albany on the south coast of Western Australia. She has produced content that was published online, and broadcast on radio and TV, some of which was also translated into Bahasa Indonesia and Chinese and syndicated across the Asia-Pacific.

Suzannah spent two years as a science writer and communicator with public relations consultancy Science in Public, before rejoining the ABC and the science unit in mid-2019.

Suzannah is passionate about storytelling and science, and particularly the intersections between the two. She believes in making science accessible so that people from all walks of life can appreciate the ideas, stories, humans and history behind scientific research and discoveries.