Meet senior science communicators from all parts of the industry and find out their tips for success.

In small groups of similar interests you’ll spend ten minutes with a few mentors, getting their thoughts and asking some questions.

Could be the inspiration for your future career!

What will audience gain from attending this session?

Ten minute slots with each mentor – 8 or 9 different mentors.

A few words from our sponsor

Dr Merryn McKinnon has slimed presidents, made children laugh and created programs and events to change ideas and inspire interest in science and its communication. She is now a science communication academic who still practices what she teaches and actively works to contribute tangible mechanisms to enable a truly diverse and inclusive STEM workforce.

Dr Graham Phillips was the host and a producer/reporter with ABC television’s science programme Catalyst for many years, and is currently teaching science communication at the University of Melbourne. He’s also reported science on TV Networks Nine, Ten and Seven, done countless hours of science on radio, written about science for most newspapers in Australia, and had four popular science books published. He started his career as a scientist, with a PhD in astrophysics.

Stephen Oliver is Manager, Documentaries at ABC TV . He’s an award-winning filmmaker turned ABC Commissioning Editor who is passionate about telling meaningful stories with big social impact. His commissioning credits include LOGIE and AACTA-winning War on Waste, series 1 and 2, AACTA, Venice TV and Japan Prize-winning Employable Me and Eureka prize-winning Can We Save the Reef?

Lee Constable is a science broadcaster and host of Network 10’s kids science TV show, Scope. She is also the founder of Co-Lab: Science Meets Street Art where she pairs early-career researchers and PhD students with street artists who create live murals inspired by their work for the public.

Suzannah Lyons is the online science reporter for ABC Science. She has previously worked for ABC Open, ABC Emergency, ABC Health & Wellbeing, Catalyst, and as a science communicator. Suzannah trained as both a chemist and a journalist but found she was better at telling stories than hanging out in the lab. She can still make a mean batch of cornflour slime.

Liam Mannix, is the national science reporter for The Age and Sydney Morning Herald. He loves science!

Tilly Boleyn is the Curator of Science Gallery Melbourne. Her interests focus mainly on blurring the boundaries between science, art, design, technology, maths, engineering, large-scale-batteries-powered-by-human-urine and doing things she’s told aren’t allowed. She is a massive nerd who is curious about the world and everything in it.

David Wansbrough started communicating science as a Questacon explainer (way back in the last century) and was part of the Science Circus in 1993. Since then he’s been a bureaucrat in the Australian and New Zealand governments, working on a wide range of topics at the intersection of science and policy: genetic modification, climate change, animal welfare, food safety, and immunisation.

Adam Selinger is the Exec. Director of Children’s Discovery, a social enterprise creating discovery spaces for children and families through playful learning, such as the Early Start Discovery Space at Wollongong University and Little Bang Discovery Clubs run out of public libraries. Prior to this, Adam worked at science centres in Canada and Europe, and science festivals in the UK, South Africa, UAE, Indonesia and China.

Dr Lisa Bailey is a science communicator who has worked in cultural institutions in the UK and Australia.  At the Royal Institution of Australia she helped design hundreds of science engagement events for communities across Australia, including producing the SCINEMA International Science Film Festival for 3 years.  She’s now at MOD. at UniSA, designing exhibitions for Australia’s leading future-focused museum, provoking new ideas at the intersection of science, art and innovation. She’s ASC National President, too.

Dr Subho Banerjee is the Research Program Director at ANZSOG and works on the interface between academia and public policy practice. He was previously a Deputy Secretary in the Australian Public Service, and has served in a range of strategic policy and program implementation roles spanning economic, social and environmental policy areas. He has also worked as a management consultant in the private sector and for an Indigenous policy thinktank.

Claire Harris is a business owner, writer and innovation advocate. She began her career in fisheries research and now works with innovators in research, technology and sustainability on communication and marketing projects and has recently launched in to social enterprise.

Dr David Robertson is a science communicator and sustainability educator. He’s interested in creative ways to engage people with the big challenges and complex issues of our time. From orchestrating zombie apocalypses and trying to put Vantablack on display, to devising twisted pub quizzes about climate change, and most recently landing in the tertiary education space, he’s always keen to push the edges of practice and coax new ideas into reality.

Dr Kirsti Abbott is an ant ecologist, science communicator and educator and currently Program Leader of UNE Discovery at the University of New England. She develops and facilitates transformative and playful engagement experiences in STEAM for students and communities in northern NSW.

Dr Sheryn Pitman has a background in environmental management, community engagement, education, creative writing and communication. She works with Inspiring South Australia in science engagement and communication. Her work includes a focus on telling stories of science through the arts. She has also worked with government agencies, with Greening Australia, and as a free-lance creative writer and director, including documentary film, television and radio.

Toss Gascoigne is a visiting fellow at the CPAS at the ANU, and has just finished a book charting the emergence of modern science communication in 38 countries. He is interested in the interface between science and policy, and organised the first Science meets Parliament while working as Executive Director of FASTS (now Science and Technology Australia).

Dr Jen Martin founded and leads the Science Communication Teaching Program at the University of Melbourne. She’s been talking about science on the radio for 15 years, writes a popular science blog and is currently writing a science communication textbook.

Dr Linden Ashcroft is a lecturer, climate scientist and science communicator at The University of Melbourne. Linden shares her love of all sciences on community radio in Melbourne, edits a peer-reviewed journal on scientific data, and her writing was selected for the 2019 Best Australian Science Writing Anthology.

Natsumi Penberthy is an associate editor at Nature Research works with talented writers, illustrators, designers and photographers, and has edited everything from pieces on native Australian sandalwood to the latest in genetic testing. As a writer, she has reported on shearwater hunting by indigenous Tasmanians and the latest developments in the superbugs crisis, among other things

Dr Simon Torok is Director of Scientell, a science communication business specialising in environmental and climate change communication. He has managed communication for CSIRO in Australia and for the Tyndall Centre in England. He has published more than 150 newspaper, magazine and scientific journal articles, and co-authored 19 popular science and climate change books, several of which have been translated into Spanish, Portuguese, Chinese, Korean and Hungarian.

Alvin Stone is the Media and Communications Manager for the ARC Centre of Excellence for Climate Extremes. Previously he has edited newspapers for Fairfax and News Corp before taking on science comms roles with WWF-Australia, and later as a senior consultant with Primary Communication. He regularly runs communication workshops for researchers across a wide variety of scientific disciplines and has extensive connections into the media and climate science communities.

Clare Mullen works at the Bureau of Meteorology (BOM) as a Communication Adviser. She is a meteorologist with a Masters in Communications. Her current role as a content specialist includes presenting BOM Webinars, contributing to script for the Climate and Water Outlook videos, and acting as a BOM STEM Ambassador.​

Dr Cobi Calyx has more than a decade of experience working internationally across science communication, health promotion and environmental governance, with organisations ranging from the Australian Broadcasting Corporation to the United Nations. She’s currently a Research Fellow in Science Communication with the Centre for Social Impact at UNSW Sydney.

Cass Rowles a science communicator with a background in biological sciences and community engagement, but now work in the astronomy space as a content creator. She also runs her own business taking reptiles to children’s birthday parties and other events. You might say she has a varied career in sci comm.

Toni Stevens manages communication activities for both the Ecological Society  and Clean Energy Council, from social media and newsletters to websites and media, fundraising and the promotion of awards. She worked for five years at Melbourne science PR firm Science in Public and before that wrote environmental impact assessments at an engineering consultancy.

Damian Harris has delivered science education programs across Far North Queensland, been a communicator for CSIRO and Questacon and is currently the Marketing and Engagement Manager for Griffith University. A career highlight is founding and directing the Scinema International Science Film Festival for 15 years and transitioning the Festival to RIAus.

Aidan Muirhead is a graduate of ANU’s CPAS who  designed, delivered, and coordinated a range of Questacon’s national science outreach programs. She now works at NCI – the National Computational Infrastructure – promoting the value of supercomputers by writing about research, creating conference platforms and social media content.

Dr Janine Young is a freelance science writer and editor, and has worked in various fields of science communication for more than 20 years.

Dr Phil Dooley is a pub science performer, part of a science theatre group, Dramatis scientificae, a regular writer for Cosmos and twice published in the Best Australian Science Writing Anthology. His freelance projects are under the banner of Phil Up On Science and he’s worked on outreach programs at Sydney Uni, at the media office at ANU and as a comms officer at the world’s largest fusion energy experiment, JET. 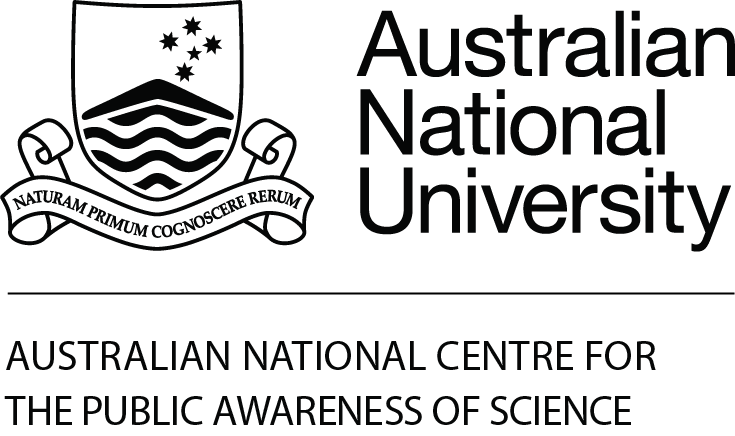